Under the economics reform agenda, it was decided that 8500 people will be trained in various areas of study in work related fields to combat widespread unemployment among young people. According to the plan there will be 56 areas of study for study which will certify the participants in 1 to 6 month duration courses some of which will be accredited internationally.

Out of 205033 locals eligible for work, 38602 are out of work whilst another 73840 expatriates works in different sectors throughout the country.

In theory this is alright, jobs are there lying vacant unmatched to prospective job-seekers. Job seekers also would have to be helped to become skilled if they are not. But the real problem that 30% of people eligible to work who remain unemployed is because of unrealistically low wages. Consider the picture below. 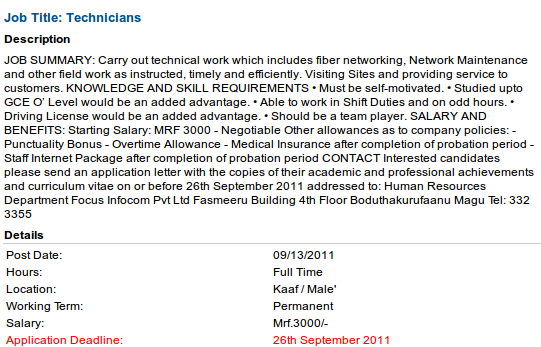 The picture is a typical job ad by a top local business brand which clearly is seen offering an unreasonably low pay for a demanding job. As for skills required, fiber optic networking could not be attempted without skills. Yet a lousy 3k per month is offered for full time employment which actually means, the employer is not interested in hiring locals. A local simply cannot survive on that kind of pay in Male’ island if he does not live in a hole or a cave or needs to eat and drink water even if occasionally!
Job ads like these are clearly designed to exclude locals from work and is all the more reason why we shall have a basic minimum wage and other protective measures like work visa quotas. Ideally a country would be left better off not having to legislate on issues like this, but if employers do not take the social responsibility then they shall be prompted to. Its also worth noting that the worst offenders when it comes to dodging social responsibility are the local employers who still have pre-slave era beliefs about the worker class.

Although we do not have tall sky scrappers like the US, today 9th September 2011 is one of the saddest days in our nations history.  Just like as the USA lost 3000 souls in their 9/11 tragedy, today we lost 5 people which is exactly the same percentage when US and our country’s population are compared. However our tragedy is not related to any war or global conflicts.

On behalf of all fellow resort workers we send our heartfelt condolences to the families of the victims and we wish them courage in this hard time. May Allah bless them and their loved ones, and make them rest in peace.

It happened in a most happy carefree setting which is repeated numerous times throughout the year in various parts of the country. Two Classes of Hiriya School (2nd girl’s school in Male’) went on a Fisheries science project to the island of BoduHuraa (near Four Seasons Kuda Hura) with some of their teachers and their late principal Mr. Ali Nazim. He is a strong swimmer and a swimming instructor as well. Over the course of the project, a group of about 8 girls somehow went in to a deeper part of the lagoon (8 feet depth) and shouted seeking help. Nazim managed to free some of the drowning girls and it appears that the remaining panic stricken teens somehow overpowered him reflexively and that appears to have been how the tragedy happend. The total body count of the tragedy is five including Nazim.

The tragedy has taken the whole country by surprise and the whole country is in mourning. Three official days of national mourning has been announced by the president and Health and Education ministry are conducting reviews of the whole situation to prevent repeats in the future.

For a successful tourism industry, a safe image of the destination is essential. The last thing a tourist will want to be worried about is the safety of their stay while on holiday. Towards this end, the key players involved have to keep their acts together. The owners, the workers as well as the government has to project this image of a clean, happy, inviting and ultimately safe destination for the guests to feel welcome at our resorts.

However recent developments in the country and the continuing attention seeking behaviour of top government officials seems to be doing more harm to our delicate tourism industry than any good. To name just one name, our ambassador at UK Dr. Farahnaz Faisal is reported to have been story-telling to prominent media outlets mostly about little known topics in the Maldives; female genital mutilation, religious extremism, supposed religious scholars exhorting folks to shun vaccination etc. To the average local Ahmed or Mohamed (the equivalent expression for average Joe..?) in Maldives, these are frankly NEWS to them. Its very unlikely the average Ahmed or Mohamed would have heard of these themes either in the media or through word of mouth. The reason is simple! These themes are very unfamiliar and hardly common practice in the country. There are no known scholars or mullahs (or whatever) who exhorted people to avoid vaccination in Maldives. Female Genital Mutilation which has been popularized and sensationalized by media is another red-herring which is totally out of place in Maldives. Most Maldivians would have heard about this practice in media as happening in some parts of Africa akin to killing albinos for supposedly traditional medicinal purposes. There are no known cases of female genital mutilation in the country and no known designs to introduce such practices to the country by any groups or ideology.

This is not to say Maldives is a trouble free country. No country is devoid of problems and problems like everything else has causes and remedies. The most popularized religious problem that happened recently in Maldives is the Himandhoo issue which was caused by the then government’s strong-man tactics rather than Al Gaidha setting up shop in the country. The issue was caused by the government sending military forces to close an unauthorized mosque constructed by the islanders for successive three years in the holy month of Ramazan. The issue could have been easily resolved had the government sent a team of religious men to talk to the people involved and engage them in dialogue. The islanders issue with the mosque was that the mosque was allegedly constructed on top of a cemetery which is forbidden in Islam. The government’s stand at the time was that the government’s position is immovable and has to be respected regardless of the circumstances.

Coming back to the issue and to set the record straight, the most prominent issue that’s currently facing Maldives has nothing to do with religious intolerance or female genital mutilation. The most pressing security problem facing the country is gang warfare and drug abuse which is sweeping through the country and is showing little sign of abating. However in the latest stats presentation offered by the security forces on the independence day, the percentage of ‘reported crime’ rate was said to have fallen 43% which is a definite improvement if all other factors were constant.

The most pressing economic problem is unemployment which to a large extent was an artificial situation created by an unimaginative education system. In a nutshell, a whole generation of youngsters grew up in conformity to 3 streams of subjects (Arts, Commerce and Science) and much too little in the way of vocational education. The non-too-distant ‘maha-singa’ (funny when names are invented) on educational policy was a good start on identifying these problems and the coming years will hopefully see changes to educational system where these issues could be addressed.

The most pressing health problem that is facing the country is lack of facilities and standards. The problem has already been a challenge with the geography of the country whereby small distant islands are further more isolated by lack of a reliable public transportation system. Seeing at a distance, the top positions of the health ministry and the members of lower the rank in the industry seems to be engaged in a proper warfare throughout the industry on a wide range of issues. The outcomes are mixed with more improvements in facilities and infrastructure promised in the near future (as is always the case).

The most pressing social problem that’s facing the country could be the lack of facilities for island communities to get together and do anything ‘social’ to while away the time and participate in social projects. Apart from the Eid festivals the average island’s social calendar is uneventful throughout the year and has been so for ages. With the anti-social behaviour and anti social elements on the increase, this maybe the opportune time to consider such an initiative.

There are indeed many more pressing problems facing the country in many walks of life, but from the perspective of tourism industry nothing can be more damaging than our own political elite spewing out unsubstantiated negative information on the country coveting media attention and personal publicity.

The education ministry is in the process of revamping the national syllabus which is said to include interesting many changes to the national curriculum. One such interesting and controversial change the ministry is pondering is offering foreign languages to secondary students which are said to include Chinese, Japanese and French. Another change they want to usher in is making Islamic studies and Dhivehi language optional which is proving to be controversial as there is opposition from mainstream to such a drastic change without public consultation.

On the issue of new foreign languages, the religious party Adhaalathu pointed out a similar case of curriculum change in Turkey which modified their ultra secular stance to include Arabic as the country has many important cultural and economic ties with middle east. Retorting on the Chinese, Japanese and French languages as optional subjects to be offered to students in Maldives, the party mentions it would have been better to offer languages Sinhalese, Tamil and Bengali which are languages of our neighborhood countries which all aspects of our country’s commerce is tied to.

Although not much commented about, this draws an important point about the choice of subjects and disciplines the ministry is considering to offer to students which clearly needs better direction. If we take a look at each language and our relation to that language in particular, we see these languages falling in the category of art and such cultural aspects of education which bigger and more advanced nations can dwell upon because of their wealth and affluence. Developing nations needs talents more in the line of crafts, and sciences which will build and the strengthen the country, after which the bourgeois can come in and setup shop. So instead of offering Chinese and Japanese language to students, the education ministry could offer them computer based languages like c++ or java or something in the line of AI (artificial intelligence). Instead of French as a subject, which was the bourgeois language of the past taken over by English, a substitute can be offered in Esperanto which is an artificial language nobody really talks. That is if the ministry is adamant that it has to be a language.